The Snow Monkeys of Jigokudani were a big highlight of our time in Japan so far. It’s a place I have been wanting to go for years since monkeys are one of my favorite animals, and it did not disappoint. It was quite a trek to get there from Tokyo and so we decided to spend a night there instead of doing a really long rushed exhausting day trip. 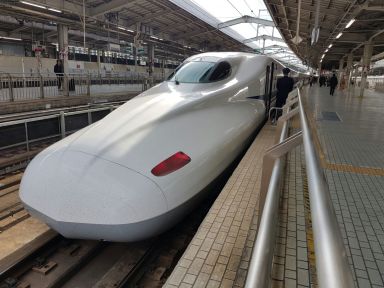 the bullet train has an interesting design

We set out from Tokyo in the early afternoon on our way to Nagano which is about 200 miles northwest of Tokyo, takes about an hour and a half on the bullet train, and costs 8200 Yen, or about $70 USD. When we arrived at Nagano station we actually met up with a really nice Japanese couple – Mariko and Taichi – who are friends of my friend Dustin and just happen to now live in Nagano. He put me in touch with them since they are super nice and big world travelers themselves and they were happy to spend the afternoon with us since it was Sunday. They drove us to a nearby village called Obuse which was super cute and famous for ‘marron’ which are sweet chestnuts. There were lots of shops selling lots of different sweets and things made from the chestnuts, which were really delicious! It was a really cool little side trip and we had a really nice time with them.

Mariko, Taichi, Ran, and me

After our stroll around Obuse we said goodbye to our new friends and took a local train for about 30 minutes to the town of Yamanouchi which is famous for its several hot springs bath houses.  It’s very close to the Snow Monkey park and also to some ski resorts so there are many hotels there, but not much else except beautiful scenery – lots of huge snow covered mountains. We stayed in a hotel with traditional tatami style rooms – the kind with the straw floor mats and paper walls where you sit and sleep on the floor. These types of rooms can be extremely expensive and luxurious but since we were not going to be spending much time there we opted for a less expensive one that was a bit dated, but it was still cool. We arrived in the evening and pretty much just fell asleep when we got there due to our jetlag and screwy sleep schedule so we didn’t go in the hot springs unfortunately. 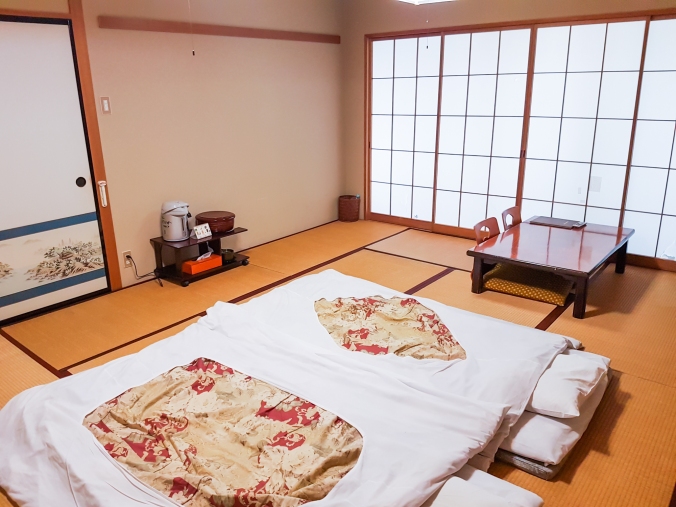 our tatami room in Yamanouchi town

The next morning, we woke up early and went to the snow monkey park to get there when it opened because that’s when you are more likely to see more monkeys sitting in the onsen (the hot spring). Cars can’t go very far so you get dropped off at a certain point and then have to walk for 30-40 minutes to get to where the monkeys are. It’s a nice walk on a path through a forest with lots of snow but the walkway was covered in ice most of the way which made things a bit tricky.

the long icy path through the forest to the snow monkeys

When we arrived to the hot spring area, there were monkeys everywhere! There were only a couple of them actually sitting in the hot spring, most of them (there were at least 100), were foraging around in the snow for food. The monkeys are fed daily by the park rangers. The feeding has the purpose of prolonging observation by making the monkeys come to Jigokudani for the food. If there was no feeding, the monkeys would just go to random places in the forest and that would make it difficult to keep track of them. It also keeps the monkeys away up to a certain extent from the farmlands, thus it also keeps the monkeys a bit safer from angry farmers. To give extra incentive to coming to Jigokudani, the food given to the monkeys is just a little bit nicer than the food they generally find in the forest, but not nice enough to pull them away from nature completely. They are fed soy beans, barley, or apples depending on the weather and season. (source)

the snow monkeys having their breakfast

Tourists are not allowed to feed the monkeys but the monkeys are very sneaky and if they catch a glimpse of any food in someone’s bag, they will definitely grab it. We saw a guy open his backpack which was sitting on the ground, and one of the monkeys spotted a banana in a plastic bag and quickly grabbed it. The guy was quick and also grabbed it and they had a tug of war for a moment before he let the monkey have it probably in fear of being bitten, and the monkey ran up a hill and enjoyed the banana. It was pretty funny.

We hung out for about 3 hours and I took over 600 photos of the monkeys! They were so cute sitting in the water, and sitting on the side of the pool grooming each other, hugging, just hanging out relaxing and not caring that dozens of people had cameras pointed at them. They were completely indifferent to all the people around, it was really cool. I only wish I was there  earlier in the season when there are dozens of monkeys all sitting in the hot spring together. On this day there were only 2 or 3 in the water at any given time. It was still a pretty amazing day and we were so glad we went, it was definitely worth the long trip to get there. I will leave you with a slideshow of some of my favorite photos of the monkeys!