We spent our last week in Japan in the Mt. Fuji area. We had originally planned on staying in Hakone for 3 nights and Fujiyoshida 3 nights, but we ended up leaving Hakone after just one night because I don’t know what I was thinking when I booked a capsule hotel there. The first night we arrived at the hotel in Hakone they actually had a private room available so we went ahead and took that. The next 2 nights however all they had was the “capsule room” which we had booked..again I don’t know what I was thinking when I booked it, I guess I did because it had good reviews. Anyway we went and took a look at the room and said no way. It was literally a room with 8 raw plywood boxes the size of a queen size bed and about 4 feet high, stacked on top of each other. Well, 4 on the bottom and 4 on top. The boxes had no ventilation except a very small fan in the wall of each one, and the room smelled very strongly of wood (think home depot lumber section) since the wood was not painted or coated with anything. It was very weird and I would have felt very claustrophobic and stuffy in there. Not to mention we have to stay up very late working and I think everyone would hear us typing away on our computers so we passed on it.  Luckily the hotel staff gave us a refund for at least one of the nights. Capsule hotels are very common in Japan but I think this one is a bit unusual as far as capsule hotels go.

the “capsule hotel” in Hakone

The main reason I wanted to go to Hakone was to go to the hot spring resort there called Yunessun. So after we picked up a rental car and packed up our things from the hotel, we went to this hot spring place before heading up to Fujiyoshida.

I think I had first heard of the Yunessun hot spring water park when I saw this article about a year ago about how you can “bathe in ramen” in Japan. I immediately noted it down for our upcoming trip to Japan as a place definitely not to miss. And we didn’t! However, when we arrived, to my extreme disappointment we found that the ramen baths had been replaced by….pancake syrup baths!! Having been in Japan for over a month already, somehow we were not surprised by this bizarre twist of events. Japan never ceases to amaze with unexpected and strange things around every turn.

This spa themed water park (I don’t even really know what to call it) is a huge building which has several different rooms with different baths/pools of different food and drink things, and all of them are very hot. Aside from the pancake syrup one they had coffee (which they had a giant coffee brewer beside the pool where they brewed the coffee and dumped it in every so often), red wine,  Japanese sake (rice wine), and green tea. All of them were diluted of course and we took a swim (or a sit) in all of them, some were bigger than others. The coffee one was our favorite, it smelled really good. It was however a bit strange being in a pool of dark brown water. Haha

The pancake syrup bath I’m pretty sure was sponsored by and was kind of an interactive advertisement for the pancake mix and syrup company. They had some times written on the wall near it, so we decided to come back to that bath at one of the times to see what happened then. And it did not disappoint! Just about everyone in the spa showed up for it and all three of the syrup baths were full. Then a Japanese guy came out with several bottles of pancake syrup…and walked around to each tub squirting the syrup all over everyone and urging us to rub it all over our bodies, so we gladly participated in that, it was really hilarious. There was no English spoken, just a lot of laughing. 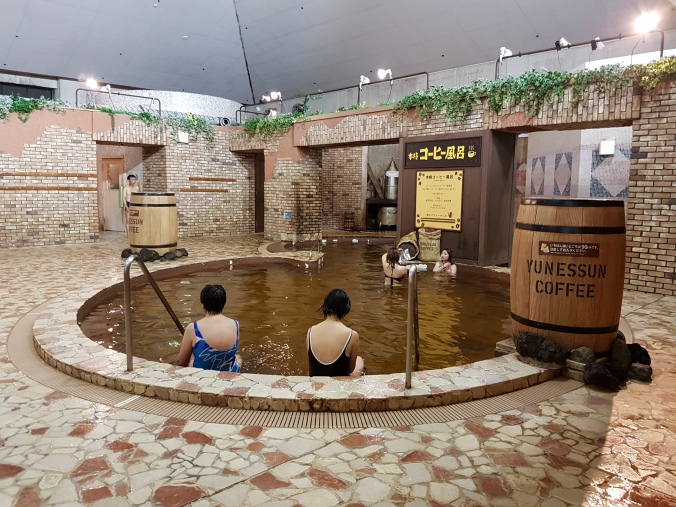 They also had an outside area with more big pools of hot water, a waterfall, a fountain, a cave, and a waterslide! I thought a super hot water slide outside in cold weather (about 50 degrees Fahrenheit/10 Celsius) was really awesome! It was cool to sit outside in the rain while sitting in the steaming hot water too. We really enjoyed this place a lot. Especially since we went on a week day afternoon and there were no more than 30 people in the whole place. I think it would have been a lot less enjoyable if it were packed full of people. I have included the rest of the photos of this place in the slideshow at the end of the post.

one of the hot outdoor pools complete with a hot waterfall

We left the hot spring park in the late afternoon and headed up to Fujiyoshida in our tiny rental car, it took about 2 hours to get there. Hakone is southeast of Mt. Fuji and Fujiyoshida is north east of Fuji, and very close to the volcano itself. We arrived after dark and checked into a hostel run by a cheerful middle aged American guy. We had a windowless but good sized room with traditional Japanese beds (futon mats on the floor), and shared bathrooms with the rest of the hostel. It didn’t seem like many other people were staying there though so it was usually quiet and we had a pretty enjoyable and peaceful time there.

The next morning we got up and drove to Churido Pagoda which is a famous spot to see and photograph Mt. Fuji framed by cherry blossoms and along side the beautiful red pagoda. You have to walk up quite a steep and high hill either by steps or a long and winding road to get to the top to the best viewing point. It was a very tiring hike up (we took the stairs up and the road back down) but the view once at the top was spectacular. We couldn’t have come at a better time of the year, we had both the cherry blossoms in full bloom and Fuji was still capped with snow.

This day, like most, it was pretty cloudy, but Fuji was at least still completely visible. Many days we heard that it’s completely covered in clouds. Since we were staying for 5 days in Fujiyoshida we figured we’d get at least one clear day, and a couple of days later it happened! So we went back to the pagoda for round two of photos. And they were even more beautiful than the first day!

the second time we went back to Churido Pagoda we had a beautiful blue sky!

For some reason, even on completely cloudless days, as you can see in the above photo, small clouds are constantly forming around the top of the volcano. It sometimes appears that it’s steam coming from the crater, but it’s just clouds. I read about it at the time but I forget what causes this phenomenon.

Fujiyoshida and the Churido Pagoda are in the “Fuji Five Lakes” area which is the area to the north of Mt. Fuji and is about 3000 feet/1000 meters above sea level elevation. We spent a couple of days driving around the lakes, and got some really nice views of Fuji from those spots as well. 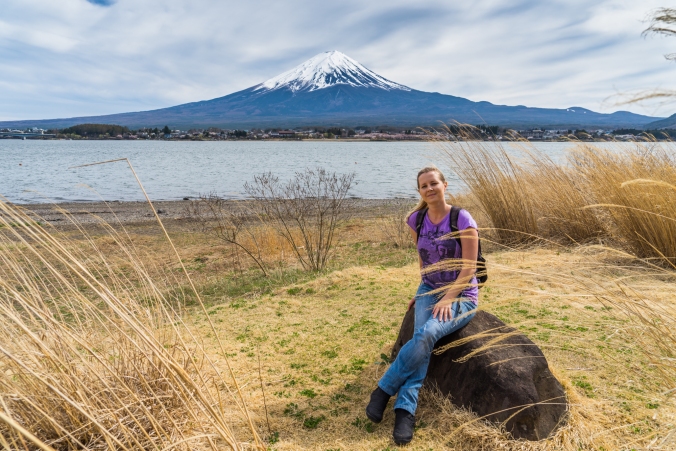 One day we visited Oshino Hakkai village which is also in the Fuji Five Lakes region. Oshino Hakkai means “eight springs” and those eight springs are around this village. There is a small entrance fee to walk through the village which has a bunch of thatch roof farmhouses. Each one is like a mini museum with different things like farming tools, samurai armor and weapons, pottery and paintings, and there was a water wheel mill as well.  The village had really great views of Fuji too! 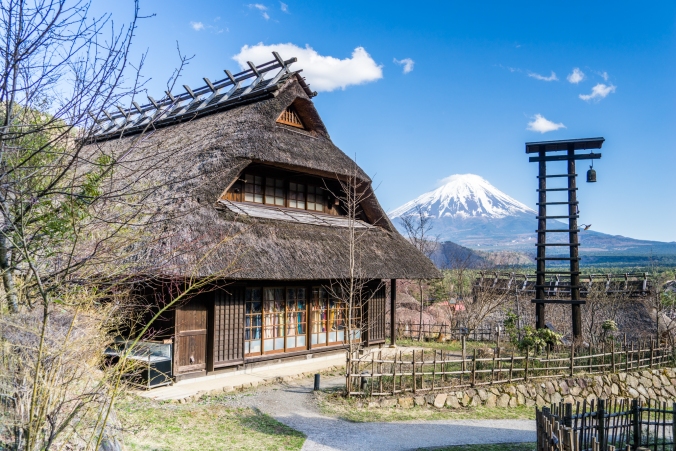 Another interesting thing to do in the Fuji area is visiting Aokigahara, better known as the Suicide Forest. Japan has one of the highest suicide rates in the world and this forest is allegedly one of the top 3 suicide spots in the world (the other two are the Golden Gate Bridge, and some bridge in China). We read that around 200 people per year enter the forest and commit suicide usually by hanging or drug overdose.

This forest is naturally extremely creepy. It’s just at the base of Mt. Fuji, so the entire forest is growing on a lava bed. Due to this, most of the tree roots are above ground. The forest is very dense so it’s just a big tangle of trees and vines and roots. Its also very dark in some places due to the density of the trees. Very very creepy. We read online about the best(?) area to take a walk through the forest, if you wanted to maybe see…ya know…bodies. Apparently the government only does a sweep of the forest once a year to remove the bodies, so at any given time there are dozens of human remains scattered throughout the forest.

I REALLY did NOT want to see any dead bodies, it really would have freaked me out, but I really didn’t think we actually would, so we decided to go for a walk down the “no entry” trail, which is apparently the spot where people seeking to end their life enter the forest, since it’s off the beaten path and you are less likely to run into other people. 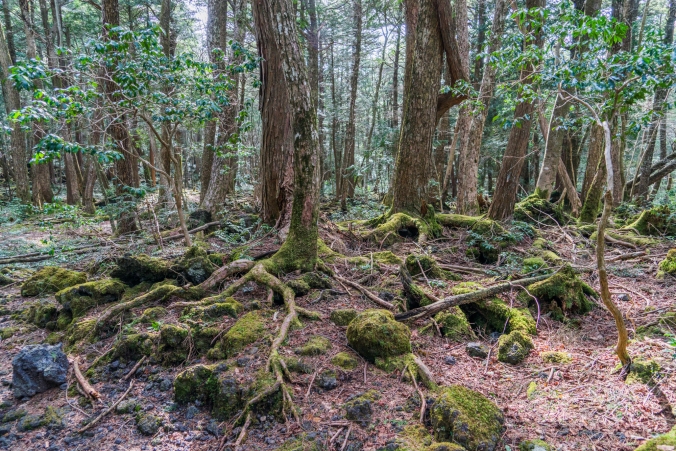 inside the suicide forest

We saw a lot of colored tape strung up while we were in the middle of the forest and later read that people who REALLY want to explore off-path in the forest will tie the tape to a tree on the path so that they can get back to the path. Otherwise you’d never find your way out. We also read that GPS doesn’t really work properly in the forest either due to the high iron content in the lava bed the forest is growing on.

Anyway it was a really interesting walk for a couple of hours and I’m glad we went but I’m glad we didn’t come across anything more than a dead umbrella!

The last thing we did in the Fuji area was to visit Mt. Fuji Fifth Station which is the highest point you can drive up Mt. Fuji. There are some shops and a restaurant and a lot of tourists. The elevation at this spot is 7562 feet/2305 meters.  Mt. Fuji itself is 12378 feet/3773 meters high. Many people who don’t want to hike Fuji from the bottom will start at this point. On a clear day you would have a very good view of the summit from here. However the day we went it was very cloudy by the time we got up there, so we couldn’t see much, but we got some great photos with the clouds in the trees!

me at Fuji Fifth Station in the cloudy trees

One more cool thing was that the lava rocks on fuji are all very colorful! Different shades of brown, gray, red, pink and purple! I wasn’t expecting that! I suppose its from a mixture of a lot of different minerals.

I think that about wraps up my stories of Mt. Fuji and actually all of Japan that I visited. I can’t wait to go back again and visit some other places there.

Next up I will be writing about Thailand, Nepal, and Bali – which are the three places we have been since we left Japan. I will try to catch up soon! For now, enjoy the slideshow of a bunch more photos related to this post.