One of my favorite things about Japan has been the abundance of animal related activities everywhere we go..and over the past more than 6 weeks we have covered plenty of them! I previously wrote about the snow monkeys which was the first thing we did in Japan and I still think was my favorite. Since then we have met, pet, and fed so many other animals!

The Deer of Nara Park and Miyajima Island

From Osaka there are many easy and fun day trips, and Nara Park is one of them. It’s less than an hour to get there on the train, and only a very short walk from the train station when you arrive until you start being greeted by dozens of cute and curious deer. 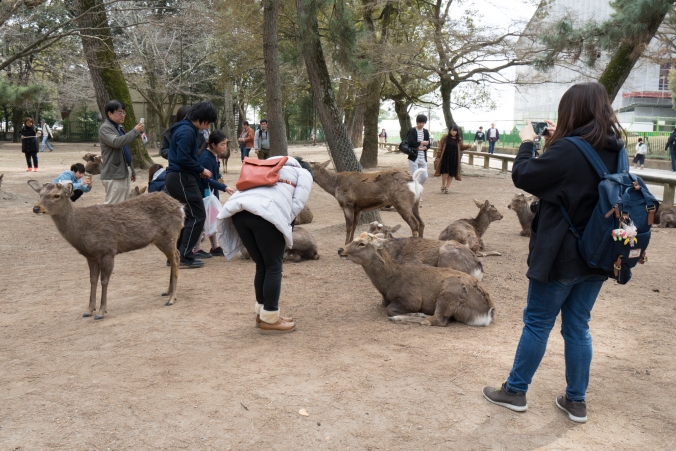 the deer hanging out at the entrance of the park

It’s actually encouraged to feed the deer at this park, as there are vendors selling “deer crackers” all over the place. We however came prepared with a lot of apples, which the deer went CRAZY for. So much so that we had to go find a store to buy more! We brought a butterknife with us that we used to chop them up, and I also bought a bag of nuts, and some of the deer crackers. Needless to say we were pretty popular with the deer! I don’t think they get fed apples very often so they were following us around and really would not leave us alone because they wanted more apples! They weren’t too aggressive though, just persistent. It was pretty hilarious. So I wrote a review of the park on Trip Advisor telling people : TAKE APPLES!

we each had a bag full of apple chunks, “deer crackers” and nuts

Nara Park is huge so we walked around for a few hours feeding the deer, and we also visited a few different temples and shrines in the area which were pretty impressive as well. It was a really great day and one of the deer even let me take a selfie with her! 🙂

Now the deer at Miyajima Island were a different story! Miyajima Island is a day trip that we did from Hiroshima a short distance away where we also heard there were deer. So naturally we thought “oh! we have to take apples with us again!”..so we did, but had a bit of a different experience…LOL

We exited the ferry terminal and immediately saw several deer. I took out an apple and a folding knife and started to cut the apple but the deer were like, immediately on top of me. So I put the knife away to avoid any accidents and just started taking bites out of the apples and giving it to the deer. Again, they went crazy for the apples. Soon I had several deer around me being very aggressive to the point that I was having to walk around backwards very quickly while feeding them because they were being very pushy and jumping up on their hind legs. Then they got impatient because I could not feed them all fast enough and three of them bit me! On the stomach! Through my shirt! (One of them left a pretty nasty mark too!). I was still laughing through it all though and about 20 people had gathered around to watch this crazy woman feeding the deer. I gotta see if any of those videos end up on YouTube! Finally after a few apples we got out of there.

when things were beginning to get outta hand..

We walked away from that area and through the town along the water towards the Itsukushima Shrine which is the main reason people go to Miyajima island, and which is known worldwide for its iconic “floating” torii gate. Unfortunately it was low tide when we were there and there were tons of people walking around under the gate so we were not able to get the photo of it in the water. Oh well, next time. 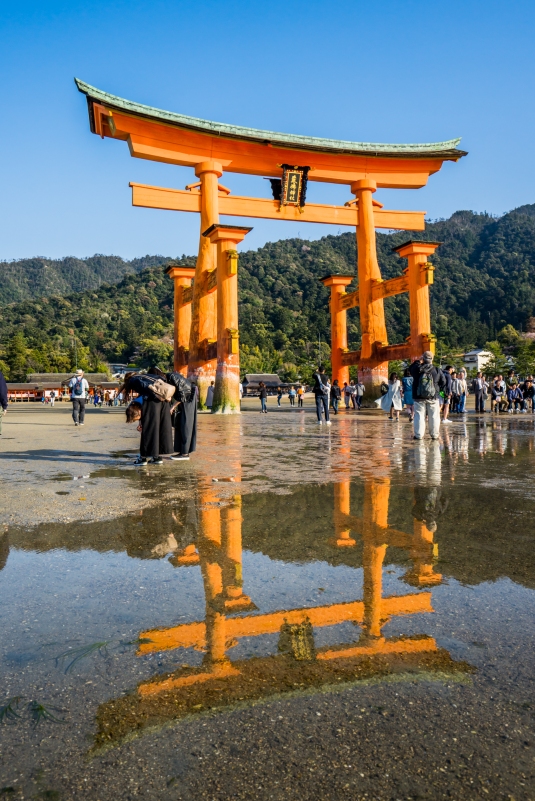 We were exploring around the island and saw a few more deer here and there which were more friendly and some were even timid. We noticed that they loved eating the cherry blossom flowers which are now starting to fall of the trees. The flowers were pretty spread out though so gathered up handfuls of the flowers and helped them out a little 🙂

After we watched the sun set over the mountains and sea we were walking back to the ferry terminal and passed by a beach where a few deer were hanging out, so we stopped and fed them the last of our apples and took a few cute photos of them..because how often do you see deer on a beach?!

Oh, one more thing, towards the end of the day when we were walking around the island we noticed a sign in a very inconspicuous place that said not to feed the deer! OOPS!! We had no idea, given that its encouraged to feed the deer in Nara. Oh well.

Japan has this weird thing with Capybaras, which are the largest rodent in the world and native to South America. They are also the world’s most chill and friendly animal ever, and are literally friends with every species of animal.  Japan has several petting zoos all over the country with capybaras- and why wouldn’t you?! Given that they are such nice animals. I’ve always wanted to meet one, and finally I got to, in Osaka. One day I went to the Osaka aquarium and noticed a sign next door that said something about a petting zoo and had a photo of a capybara. So we went back the next day and…

He (or she?) was super friendly as I expected and we had a great time hanging out. I fed him some leaves too, that they were selling for the animals. This actual petting zoo or whatever you want to call it was not all that nice though, first of all it was in a freakin’ shopping mall, not even outside. The first area had guinea pigs, rabbits and tortoises. Then you go through another door and there were dogs, cats, AND A HUGE PIG. Totally random. The pig kept trying to sit in people’s laps, it was pretty funny. Then through the third door was the “exotic” room with one capybara, a few small kangaroos, an alpaca, and some other large-ish rodent type things. Oh and a couple of owls too?? All in one big room with wood floors. It was pretty weird. I was glad to finally meet a capybara but I was a little sad for him and the other animals being indoors. Hopefully they rotate them out onto a farm or something. 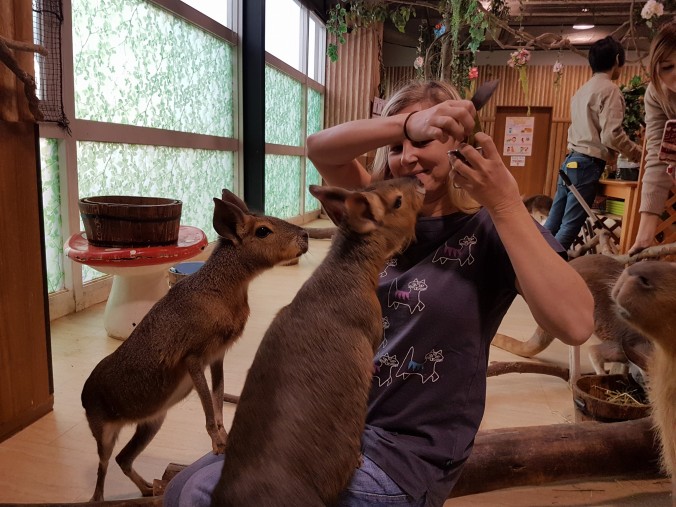 feeding the other cute giant rodent critters..you can see the room better in this photo

We FINALLY went to a cat cafe in Hiroshima after not going to one the first 5ish weeks we were in Japan. We kept putting it off because they were just everywhere and we could go to one at any time. I found one with good reviews in Hiroshima though, and we had plenty of time to kill there so we went on a Wednesday late afternoon about an hour before they were closing up. It was 1200 yen (about $10 USD) for one hour and one drink. We were the only ones there and the two women running the place spoke no english. Finally though they got us sat down and..we had come prepared…with cat nip spray…yes that’s a thing! and you should definitely douse yourself in it the next time you go to a cat cafe! LOL..we did not expect the cats to be so responsive to the cat nip spray which we sprayed on our clothes, and I think the ladies running the place were a bit confused as to why all the previously sleeping cats were suddenly circling us like sharks. It was so funny! So yeah we got to pet a lot of cats!

This cat cafe was cool because they had a lot of rare kinds of cats that I’d not seen before, like munchkin cats (very very short legs), norwegian forest cats, ragdoll cats, and scottish fold cats. They were all very cute and most were friendly, but a few of them like the gray and white munchkin  was being a jerk to the other cats and kept swatting and hissing at them. I guess that happens when you have 20 cats in a cafe the size of a one bedroom apartment. I think they had about 8 too many cats in there, but most of them seemed content.

a “scottish fold” cat, named that for their folded ears. this one reminded me of puss in boots from the Shrek movie. so cute

Last but not least – bunny island! Another place I’d been wanting to go to for years, ever since I saw videos on YouTube of the place. It was also a day trip from Hiroshima. A bit far though, almost 3 hours to get there because you have to take a couple different trains and a ferry. Anyway we arrived around 3:30pm and as soon as we stepped off the ferry we could see all the bunnies running all around. It’s also encouraged to feed them here, and they specifically tell people to bring fresh fruits and veggies or proper rabbit food for them, so we went to a pet store and bought 3 kilos of rabbit food pellets which were not cheap – about $30. I think they were very high quality delicious pellets because the rabbits really enjoyed them! Anyway we also got 2 bags of carrots at the supermarket which I cut up before we left. Those were very popular as well.   A lot of other people there were feeding them lettuce and other produce.

This island is pretty big and we walked around it for a few hours feeding all the bunnies. I was really glad to see water bowls for the bunnies everywhere with fresh water in them. Most of the bunnies were pretty friendly and didn’t mind if you pet them but others didn’t really want to be touched. We found that the orange ones were most friendly for some reason. 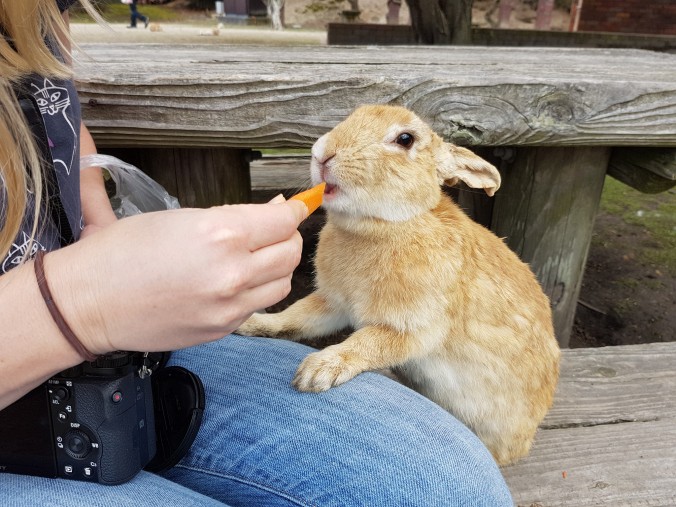 me feeding a bunny friend a carrot stick

There are a few different theories of how the bunnies ended up on this island -which was used a lot in the war- but no one knows for sure. There didn’t appear to be a lot going on on the island presently, there was a huge resort but it didn’t look very busy. The ferry had about 100 people on it and several cars though, so something was going on maybe on another part of the island where we didn’t go. The island itself and the surrounding area was really beautiful though, very clear water, nice beaches, other mountainous islands in the distance.

When we went to bunny island we were expecting a lot more bunnies all in one spot and hoping to recreate this video..haha…but the bunnies were all pretty spread out. I tried at one point to herd a bunch of them into one spot, but it was like herding cats. It was not happening at all. I think maybe if you go first thing in the morning when they are all hungry you could get 20+ of them to come up to you at one time but we got there in the afternoon and they’d been eating all day long and most of them were not hungry and just wanted to lay around, so oh well. We still had a wonderful time on bunny island! 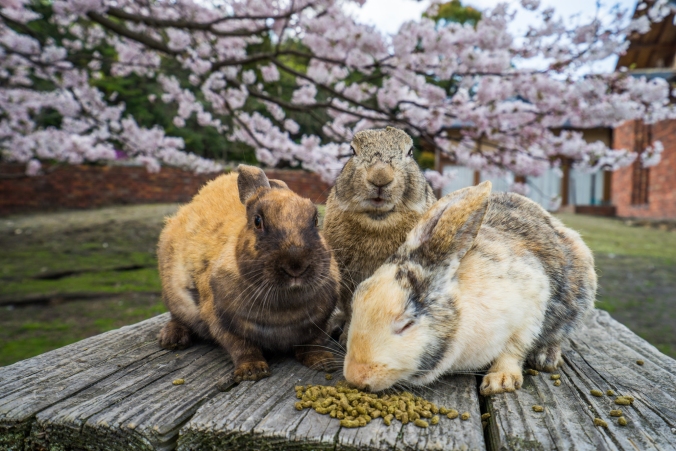