Japan is full of weird and wacky things that I have been accumulating notes about so I figured I’d write about all of them in one big post!

Everyone knows that Japan has a lot of great food like sushi, ramen and kobe steak, but they also have a lot of very strange snack foods and candy! One well known candy that Japan is known for having a lot of unusual flavors of are KitKats. You can find a lot of crazy flavors such as Purple Sweet Potato flavor, Red Bean Sandwich flavor, Flan flavored, Green Tea flavored (which I tried in Thailand last year, super gross), and even Japanese Sake flavored (fermented rice wine). We bought a bag of the flan and sake flavored ones and they are ALRIGHT but definitely strange tasting and I probably would not buy agin. The only one that I would buy again is one that has nuts and berries pressed into the tops of the KitKat bars. Those ones are actually really tasty. I have included photos of all the weird flavors in the slideshow at the end of the post.

Sweet Potato Ice Cream is a thing here as well that I see quite often.  I can’t even begin to imagine what sweet potato would taste like as an ice cream flavor and I’m not sure I want to find out. Green tea ice cream is also quite common in Japan. While I enjoy drinking green tea, I have never had any green tea flavored food that I thought tasted good.

Japan has over 5 and a half million vending machines, and it’s not hard to believe once you’ve had a walk around any city. They are on almost every corner, and sometimes there will be a row of like, 10 of them. Our airbnb in Tokyo had about 12 vending machines within 50 feet of the front door of our building, which was awesome. There are some with snacks and ice cream, etc, but the most common vending machine are just drinks, both hot and cold. Most have a variety of different kinds of teas, juices, and a lot of coffee, not a lot of soda or carbonated drinks. Most are around 100-150 Yen (so around $1 USD more or less). One of my favorites is hot lemon tea which comes in a bottle. Really yummy and doubles as a hand warmer when walking around outside when it’s really cold! There is also an iced apple tea by Lipton which is delicious. 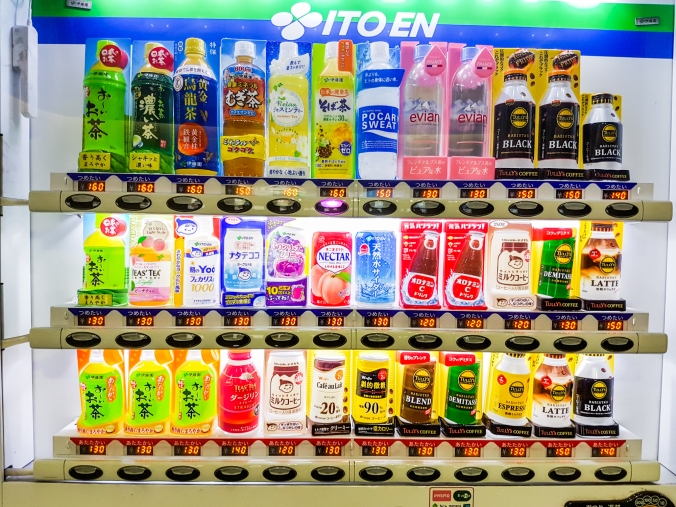 corn drink in a vending machine

Another thing I see quite often in vending machines that is super weird are things like a can of hot corn…juice..stuff? As well as a hot red bean drink, and I even saw one that was some kind of hot onion drink. I’m thinking they are some kind of a soup more than a beverage, but they are definitely in a beverage type drinking can. Maybe I’ll try one some day and find out.

Oh – one other thing – many restaurants, especially fast food type restaurants, work in a strange way. They have a vending machine out front with a lot of different selections. You put your money in and make your selection, and it spits out a ticket with your order on it, which you take inside and hand to someone who brings you your food. Pretty good idea I think.

“Capsule toy” machines are very common and plentiful. These are similar to quarter machines in the US where you get a small toy in a plastic bubble but these cost on average 200-300 Yen each ($2-ish dollars). The toys in the machines are mostly small plastic figurines, one common one I see are figures of a lady in different positions, which is for hanging on the side of a drink cup. I don’t get it. But I got one. Haha. 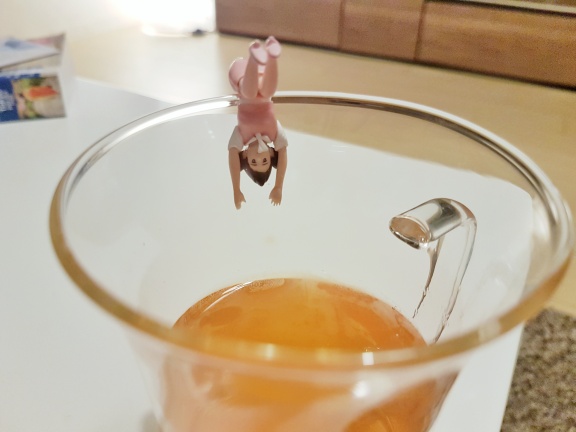 These capsule toy machines aren’t ever just in a group of 4 or so like you’d see in other countries, ohh no, here there are at least 50 or more of them in each place. I think the best/most funny capsule toy machines I’ve seen yet had hats for small dogs, and another one had miniature toilet paper fixtures (photos of those in slideshow). 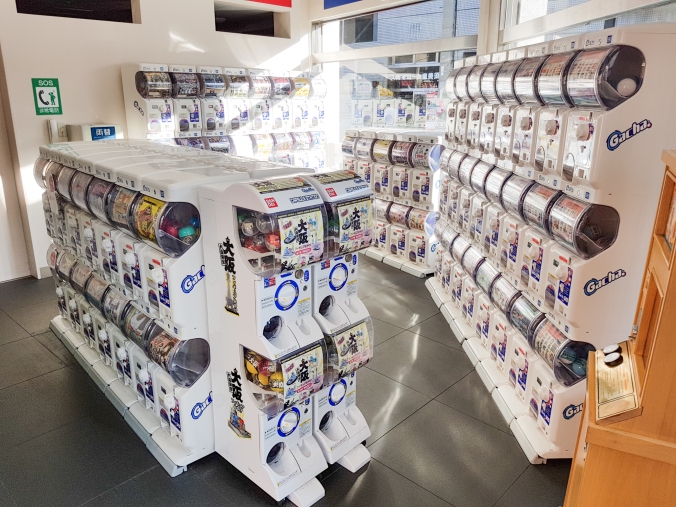 Arcades are everywhere here too. The Japanese love their arcades. Some are even open 24 hours. Most arcades have a lot of the normal video games, and they also have dozens of claw machines, which contain of course a lot of stuffed animals – some have a single, huge stuffed animal which is hanging by just the tag which is wedged between two parallel bars, and all you have to do is use the claw to unhook the tag and the whole thing falls down. It looks easy but we have never seen anyone actually get one. Many claw machines also contain all kinds of food items.

There is an EXTREMELY popular game here called Pachinko. This game is for adults and usually in a casino type place. These places are also VERY smoky because everyone is just sitting playing this game like zombies while chain smoking. We went and played one day thinking it must be pretty exciting because pachinko parlors are always packed full. But disappointingly it turned out to be a really lame and boring game. Basically all you do is turn a knob on the right side of the machine which controls the speed at which small metal balls are launched from the bottom to the top of the machine thru a channel on the left side, at which point they fall down through a series of metal pins. The objective is to get them to go into a single hole in the bottom center of the machine. The thing is, there is no way that the velocity at which the balls are launched at all affects whether or not they are going to fall into the hole at the bottom, once they make it there. So it is a completely skill-less game. But I guess the same could be said about slot machines. I suppose people play pachinko to possibly win money, but with any casino game most people are probably just losing it.

Ran playing pachinko in Tokyo for the first and last time

Our favorite arcade game here so far is what we call the “coin pusher” game. I don’t know what it’s actually called. But it DOES involve some level of skill. One day we got sucked into playing this game for over an hour and put about $20 into it, which we eventually lost but we still had an exciting time. Most of you have probably seen or played this game before. You have to put coins into a slot which roll down the arms onto the upper platform, and there is a vertical wall thing that goes back and forth pushing the coins forward. The idea is to strategically place the coins so that a lot more coins get pushed over the edge in the front and fall out to you. Pretty fun game.

the “coin pusher” game that I love

Most people know that Japan has some pretty high tech toilets. And if you don’t, you are about to learn about them! One thing I was pleasantly surprised to find out about many Japanese toilets is that they have HEATED SEATS! Which as you can imagine is a wonderful thing to sit down onto in the winter. Even most public toilets have heated seats. Most toilets in Japan also have a control panel which is either on the side of the seat, or on the wall beside the toilet. The control panel has many functions including various water sprayers, water pressure, water temperature, a button to make a flushing sound without actually flushing, all kinds of fun stuff. I’ve heard that some even talk to you, but I’ve not used one of those yet. All I know is I’m definitely going to miss the hot toilet seats when I leave here! Not sure why the heated toilet seat hasn’t caught on in the rest of the world, especially the Arctic! 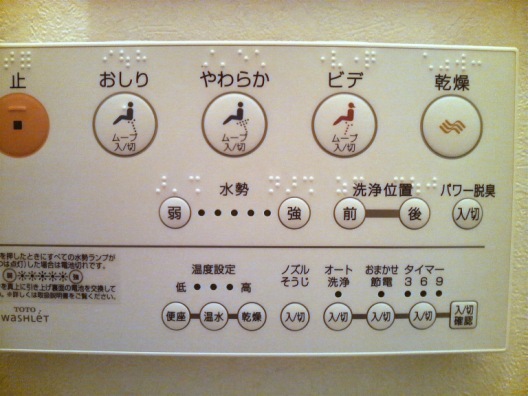 Well I think that about sums it up for this post. I still have a lot more to write about so I will continue later this week! For now you can enjoy the slideshow of randomness.

One thought on “Random interesting and weird Japanese things”